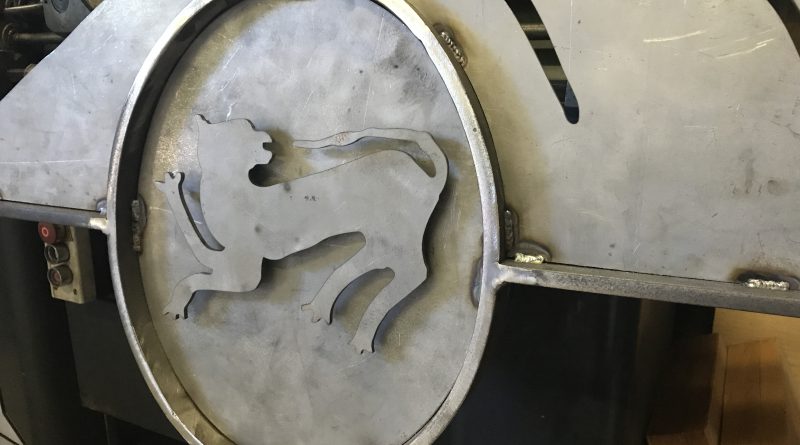 I was approached back in the Autumn of 2015 and asked to provide an estimate for a new village sign for Peasmarsh village, a village just outside Rye in East Sussex.

The sign was to be of a black iron construction and mounted on a oak post – this was the brief, and with the limited detail I obliged with an estimated price for the sign.

I’d almost forgotten about the project when in February of this year (2017), I was contacted again.  The parish council had organised a competition for the children of the village to design the new sign, and elements had been selected from various entrants.

This is the drawing I was supplied with. 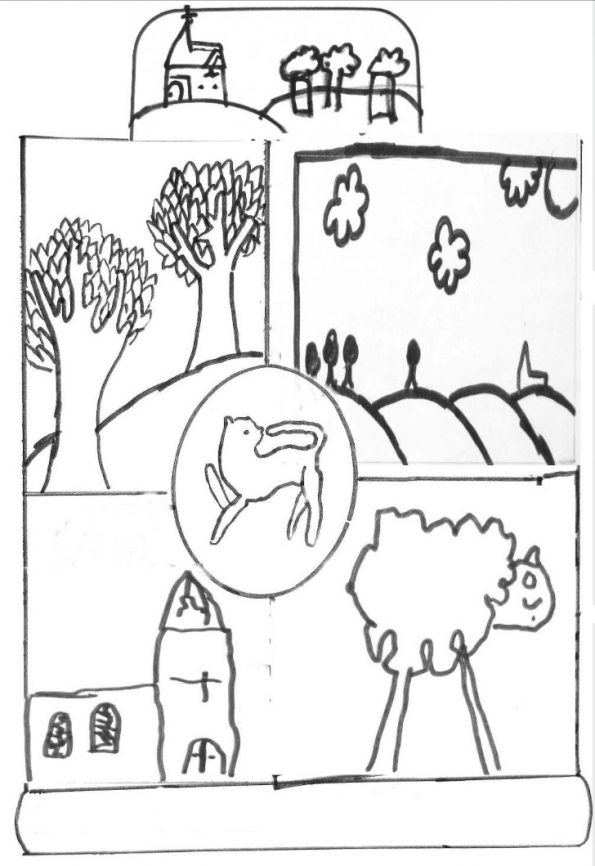 I was delighted with the children’s ideas, and the composition of the final outcome.  The cat-like creature in the centre oval, is actually a panther and is taken from a wall painting in the parish church.

I liked the simplicity of the design and set about translating it as faithfully as I could into an artwork proposal.

I had to compromise and represent the sheep in a slightly more recognisable form.  Shame really, as the long-legged ewe in the original sketch is rather fun. 🙂

This was my initial interpretation. 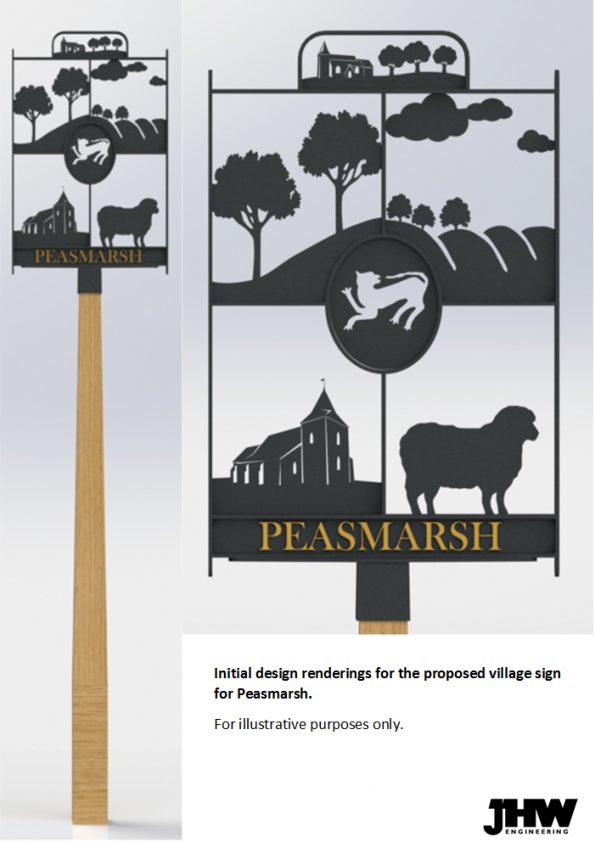 After a meeting with the parish council to discuss this initial idea, several minor changes were requested.

It was felt that the type needed to be larger and that there was too much empty space between the lower church/sheep and the horizontal rail.  The committee also requested a more substantial frame around the sign.

These were excellent suggestions.

My solution to filling the void above the church was to view it from the other side, such that the spire would project upwards to the left of the centre oval. 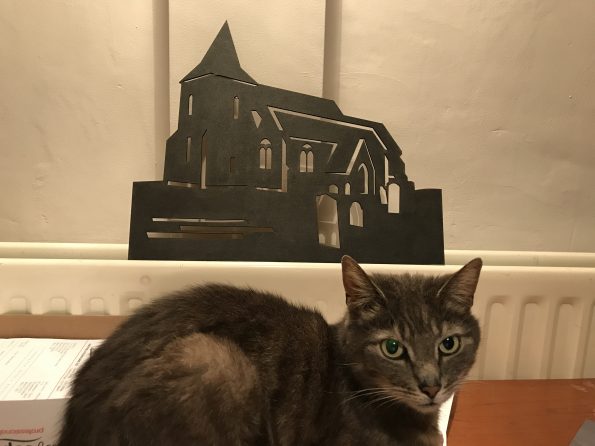 I prepared a mock-up in MDF of the revised church element with the help of a local artist.  I was pleased with his revised design, the addition of the gravestones in negative greatly adding to the scene.

Fortunately, this revision got the go-ahead from the parish council committee, and also my cat Dibnah who also seems to like it. 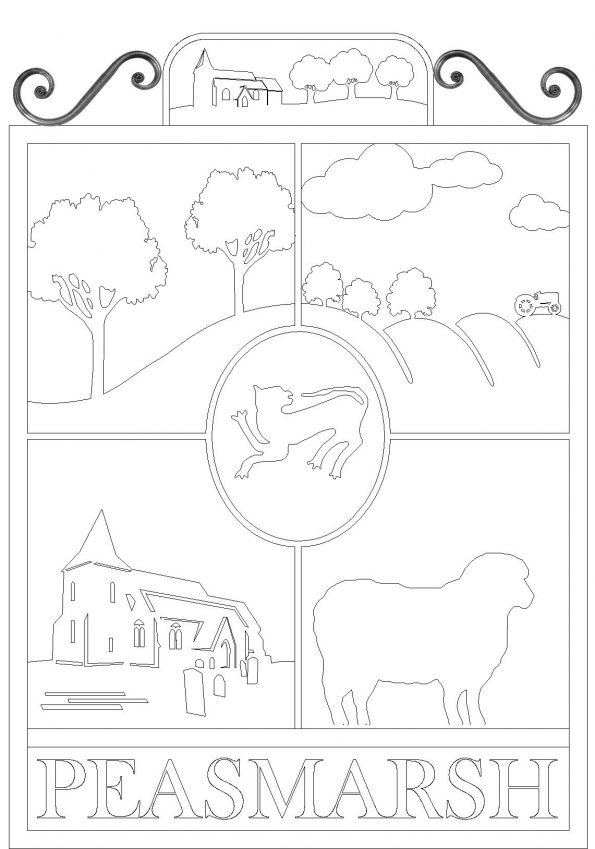 I had drafted out the revised sign in Solidworks, and had lovely renderings of it from all angles, and even in-situ. However, a pc failure caused these to become corrupted.  🙁

These images show the revised layout, notice a rather out of scale tractor has now been added to the hills in the top-right pane – a suggestion from the parish council and I’m pleased with how it’s turned out.

The colour image below is all I could recover of the original artwork, and show the design before the modifications to the church.  Note also, that the panther is now mounted proud of the centre oval and finished in red, just like the painting in the church.  This adds a welcome splash of colour to the sign. 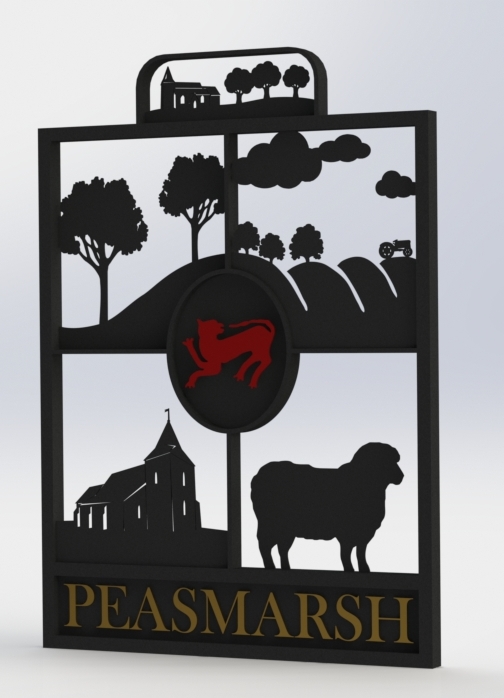 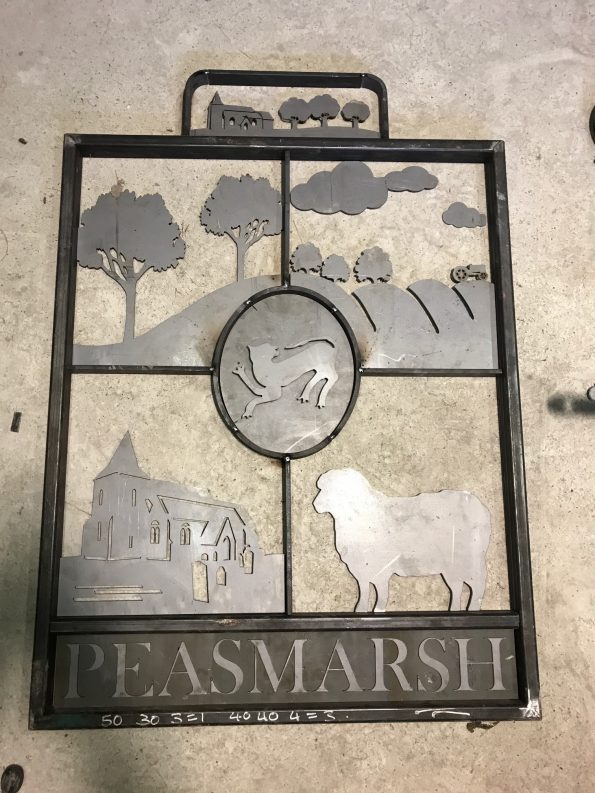 This picture shows the sign just tacked together whilst I worked out the finer details.  It gives an impression of how faithfully the outcome will reflect the design drawing.  I’ve used laser cutting extensively to create the detail elements.  It’s such a time saver and guarantees that the final outcome is just what the client expected.

The decision to make the frame more substantial was sound.  It is like looking through a window onto various scenes from the village.  That the scenes selected were chosen by children of the village is a bonus in my opinion. 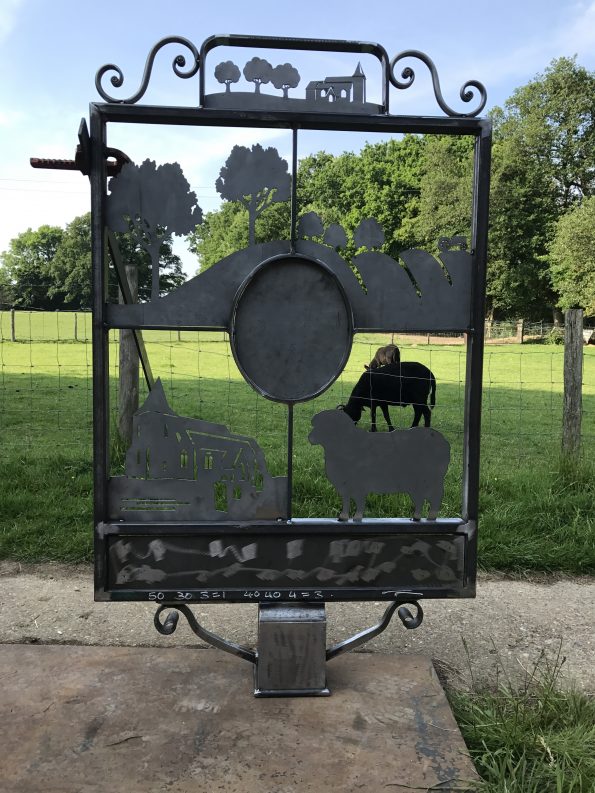 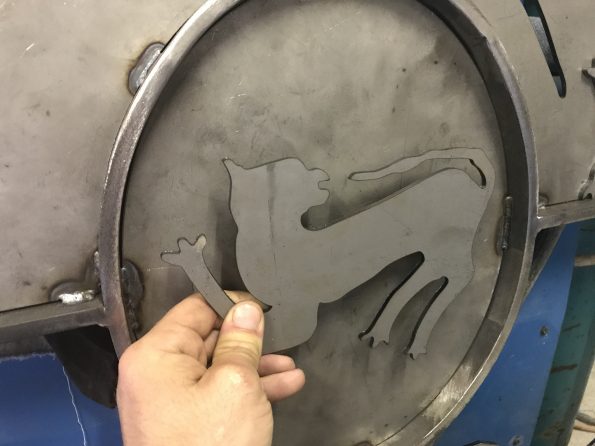 The design required that the panthers be raised slightly from the centre oval, and that they would be powder-coated in red separately from the main frame.  They therefore had to be removable.  I wanted to use a single screw to mount them.

This is what I did… 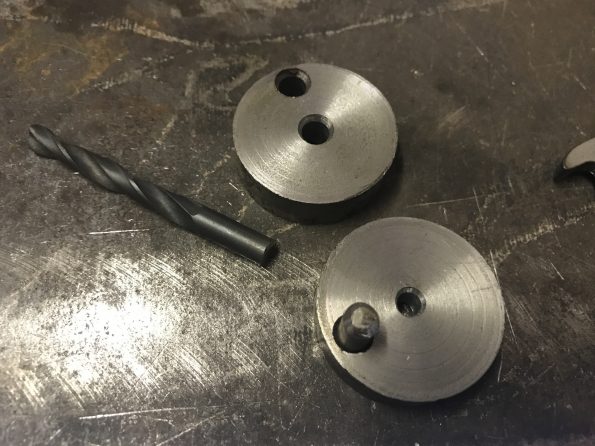 I made up two spacers, drilled each on centre, and again nearer their perimeter such that a dowel could be used to hold them in alignment.

I didn’t have a handy dowel to hand, so used a broken drill shank as a substitute. 🙂 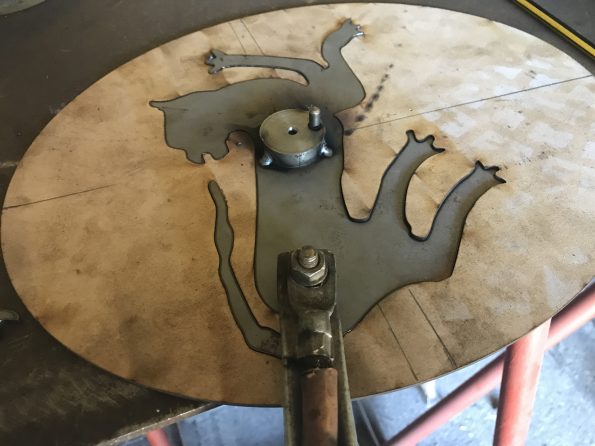 Next, I used my original MDF template as a jig to weld the spacers to each of the panthers. 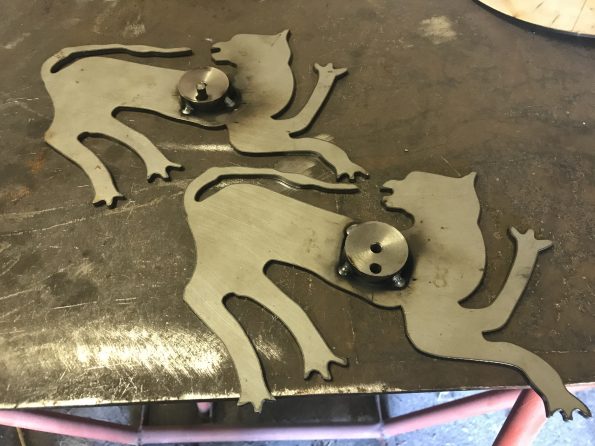 One of the panthers has a hole drilled through it, to coincide with the centre hole of the spacer.

Its opposite number has a blind-hole tapped to receive the fixing screw.

So, a screw passes through one, through the centre oval shape on the sign and secures into the other panther, thereby fixing them both.  The dowel prevents them rotating as the screw is tightened. 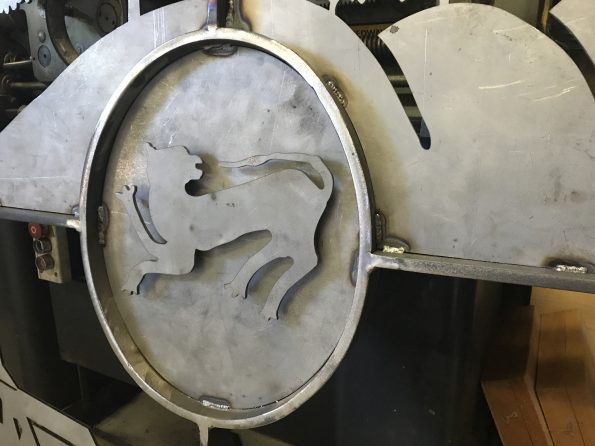 From the front of the sign, the spacer piece cannot be seen, and the panther appears to be floating. 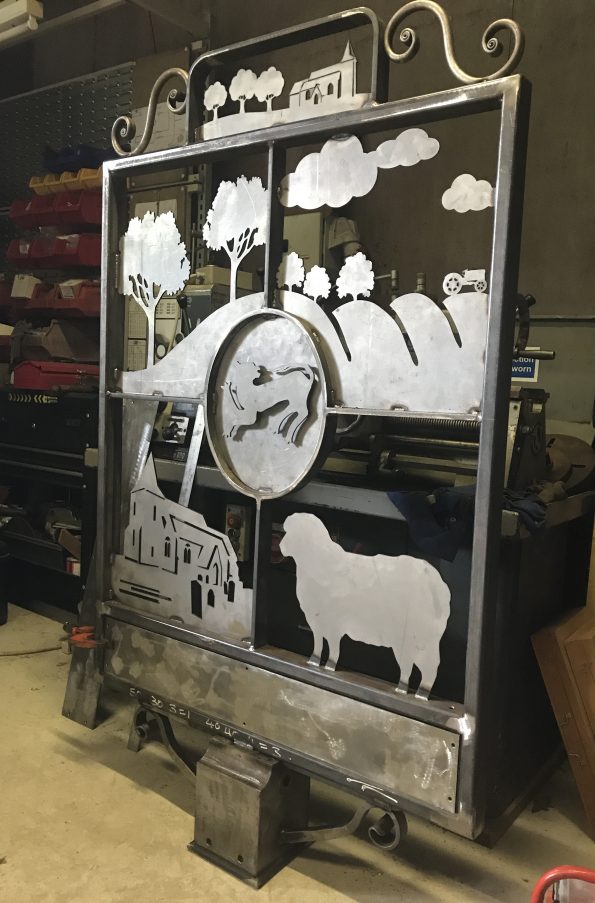 The sign awaiting final clean-up before galvanising and powder coat. 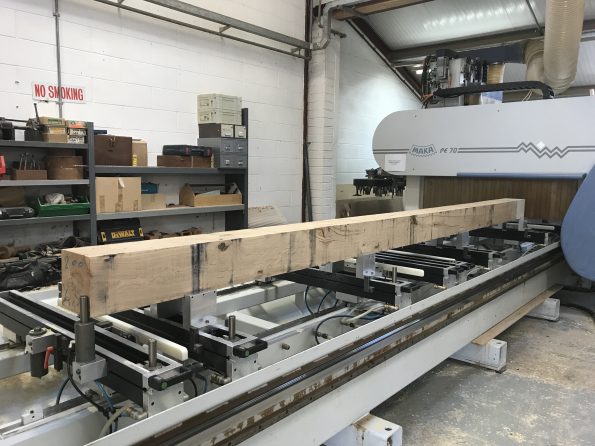 The post was cut especially for this project from a plantation in France.

Having researched other similar village signs, I felt it important that the post have a gentle taper along its length, with stopped chamfers to the corners.  Just enough detail to project that care and thought had been taken, but not so much as it would distract from, or overpower the sign itself which is a simple design generally. 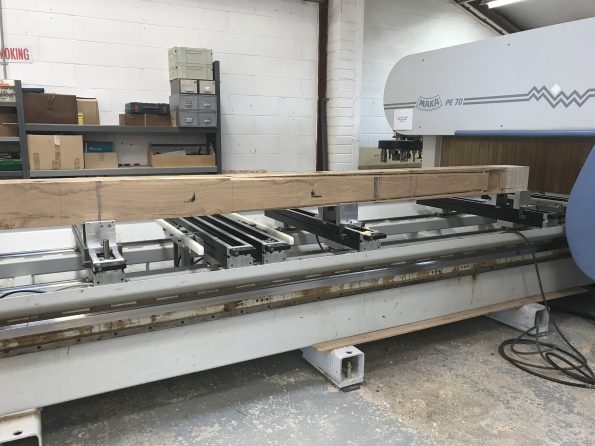 At 4.5 metres long, the post was too large for my equipment to machine, and so the job was contracted to Woodbase Joiners of Westfield.

The post was loaded onto a CNC machine for the basic machining processes.  In this photograph, you can see the tapered form being generated. 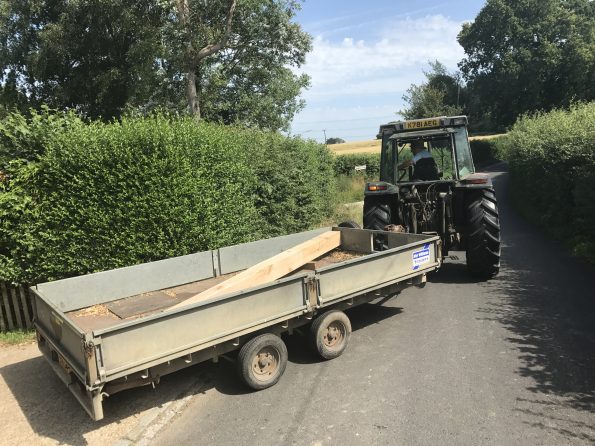 Once machined, the post was collected and taken to my workshop for final finishing and fitment of the now powder coated sign. 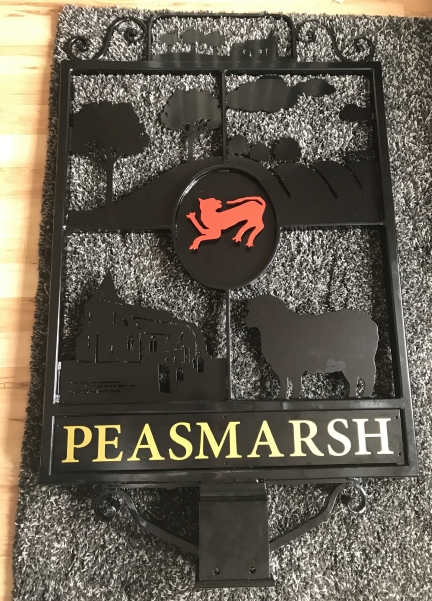 The sign, as returned from the powder coaters, with the addition of the village name.

I was so concerned that it might get knocked or damaged, I protected it by storing it on a soft rug at home until the day of erection for fear of some calamity befalling it. 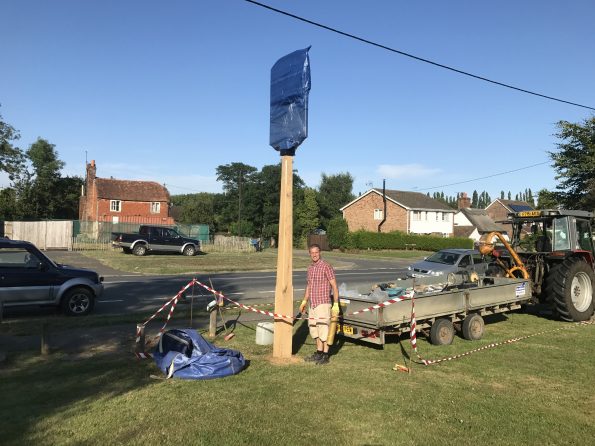 And so, on the afternoon of 13th July 2017, the sign was mounted atop its post and installed.

Here I am, tired at the end of the day, looking forward to its official unveiling. 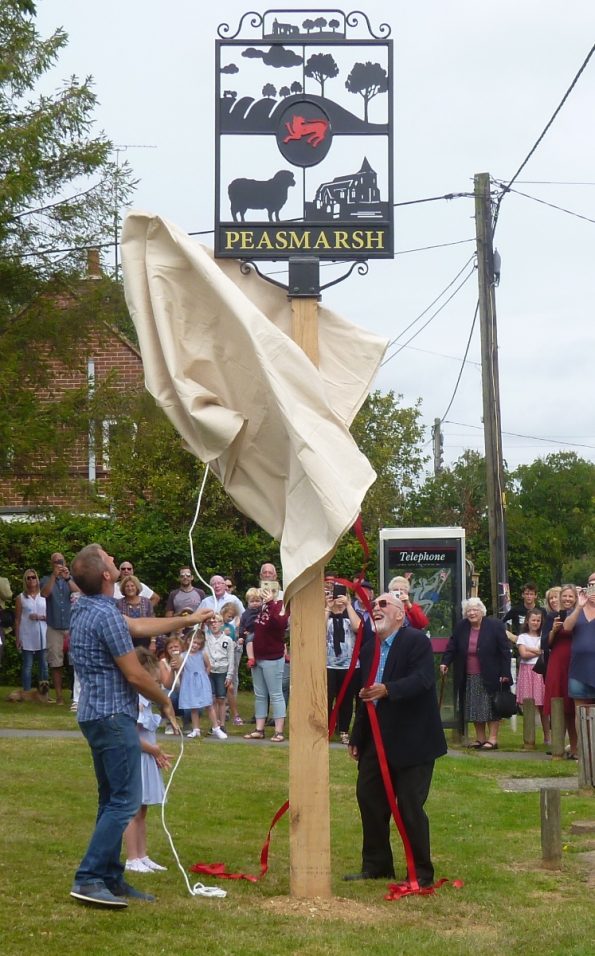 It was well received by all, and I was pleased with another successfully completed project.