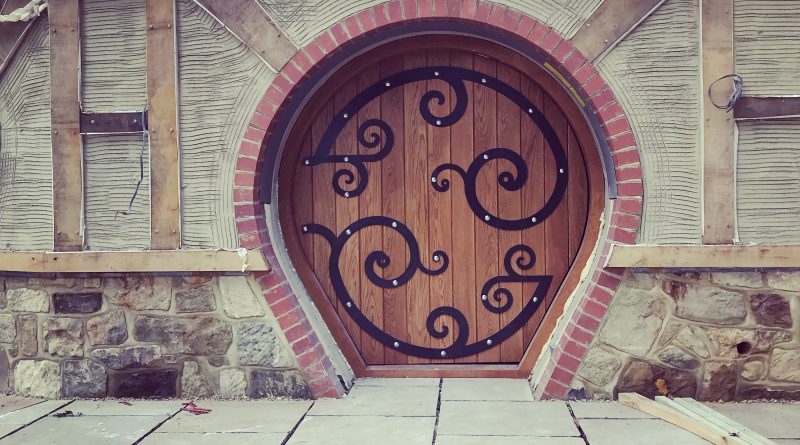 In the spring of 2018, I was approached about the manufacture of some hinges for a Hobbit House door. Not being too familiar with what a hobbit house was, or indeed the problems which might be associated with such a door, I approached the job with a cautious enthusiasm.

This post relates to the design of the hinges, and the inevitable mission-creep which such projects almost always entail…

So the brief was initially straightforward, could I come up with a design for a set of hinges which would support a massive and rather oddly-shaped solid oak door.

This is what I came up with and fortunately it met with the clients approval. We even managed to crudely photograph a miniature mock-up of the door in-situ to get a feel for the project.

At this point, the mission-creep started, and I was asked to supply hinges for the circular windows to the front of the Hobbit House.

Now, I am familiar with circular windows, and have come across bulls-eye windows before, my first thoughts being that they would pivot open along the horizontal axis. But it turned out that they were vertically opening casement type windows, and therefore a little more head-scratching would be required.

The completed hinges were supplied to the joiners who had made the windows, were fitted and taken to site. I was pleased with both their look, and function…

At this point, I had started work on the door hinges, and they were test fitted to the door..

Just as I was getting to-grips with the door hinges, the client asked for some bespoke stainless steel guttering which was to be of a large cross-section.

Material was folded, and this was installed on-site. This was to prove to be a tricky job, as a damp-proof membrane had been installed over the top of the structure, this highly-flammable cover making the in-situ welds very difficult to accomplish. However, all went well.

Later, all our handiwork would be covered by an oak fascia, but for now we were happy with the progress.

And so back to the door hinges!

It was clear that with so much weight hanging off of the hinges, and that they could not be ideally spaced due to the circular form of the door, that substantial hinges would be required. They would need to be adjustable too. So, with future maintenance in-mind, it was decided to use heavy duty gate hinges as the basis of the design.

With the technical challenges behind me (I thought), the hinges were again test fitted to the doors.

The intention had always been that the fixed element of the hinges would be face-bolted to the reinforced concrete structure of the hobbit house. However, upon test fitting, the builder remarked that the internal walls were to be dry-lined with plasterboard. Clearly there was no way that a door which required 4 people lift could safely hang on a plasterboard fixing and so a solution need to be invented.

My solution was to create a sub-plate which would bolt to the wall, allowing for the plasterboard skin to be placed over it. The hinge assembly could then be bolted on-top of the plasterboard after decoration.

And so with this final hurdle jumped, the door could be finally fitted, but not before making square nuts which would be used with carriage bolts to fix the hinges to the oak doors.

And so finally the door was fitted.

This was a most rewarding project. The outcome was an impressive and original piece. I was pleased to have been involved.

In this photograph, the oak facia has been installed to the guttering mentioned earlier. Unbeknown to me at the time of fitting, this was later filled with beach material and turfed-over such that no-one would know it was there.

The hobbit house is a fantastic structure, and a real credit to the creativity of its owners and the team who built it.