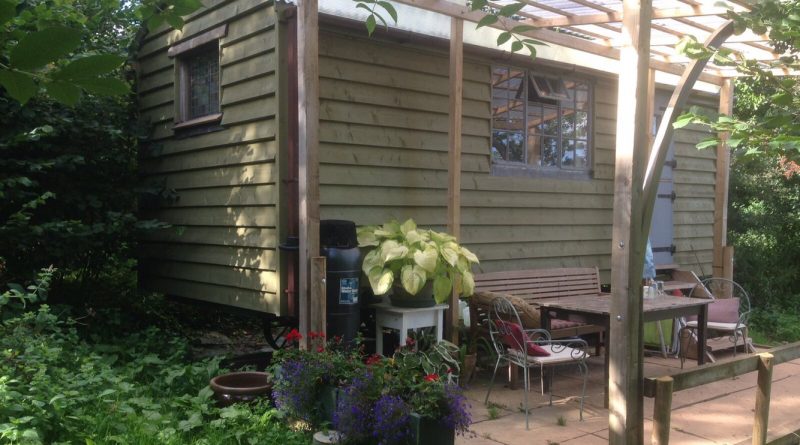 A couple of years ago I built a Shepherds Hut with with a pal.  It was destined for a lovely lady in Devon.

A couple of days ago I was reminded of the project when a photograph was sent to me of it in situ. 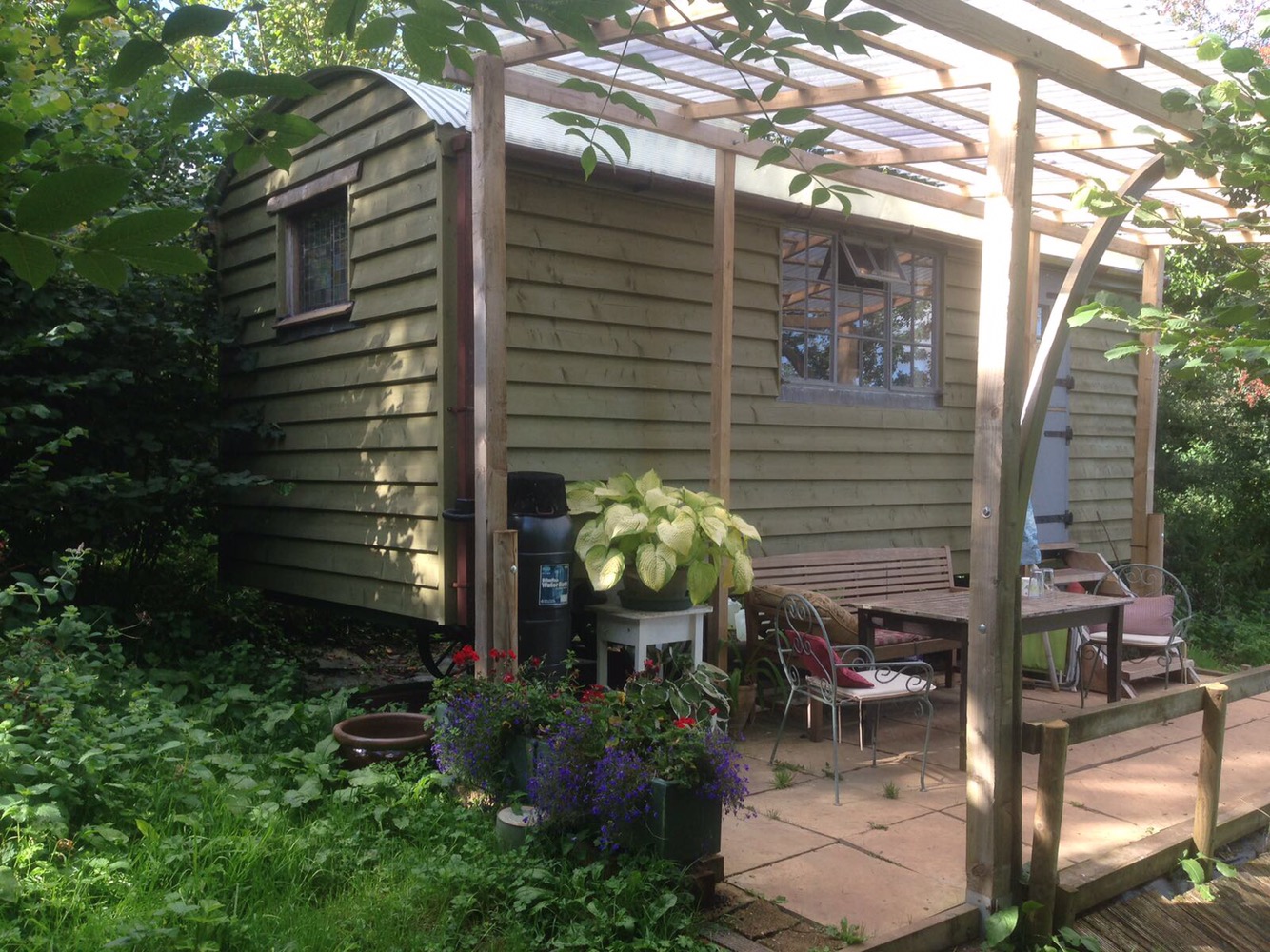 I dug through my photos of the build, and include a few here to show the build process. 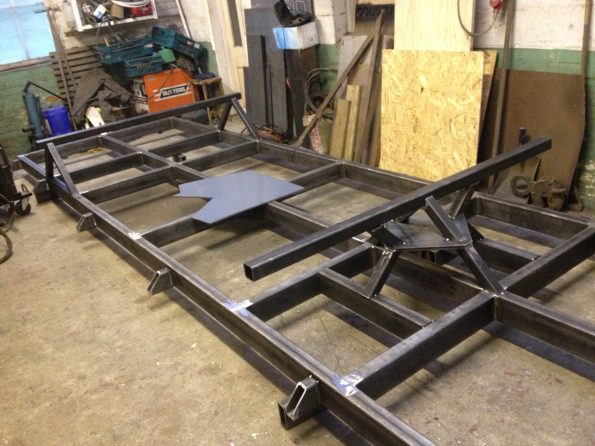 The process began with the chassis, and turntable front axle.  The grey sheet sitting on the upturned chassis is a heavy-duty low friction material which was shaped to form a large thrust washer between the two bearing plates of the turntable so as make the steering axle easier to move when subjected to the full weight of the hut. 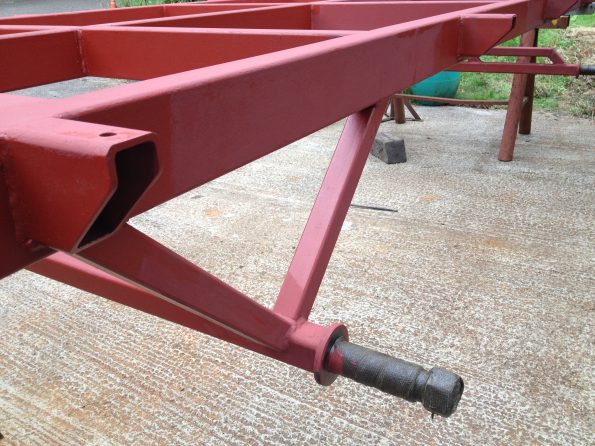 Machined stub axles were fitted to the axle tubes and threaded to receive the central wheel nut.  I’d noted that most shepherds huts seemed to have their wheels fitted with pins, but we were keen to engineer a higher quality solution.  In this photo the stub axles and nuts are wrapped with a grease soaked rag to prevent corrosion during the build.  Upon assembly, the nuts were secured with taper pins to eliminate the possibility of them winding undone during use. 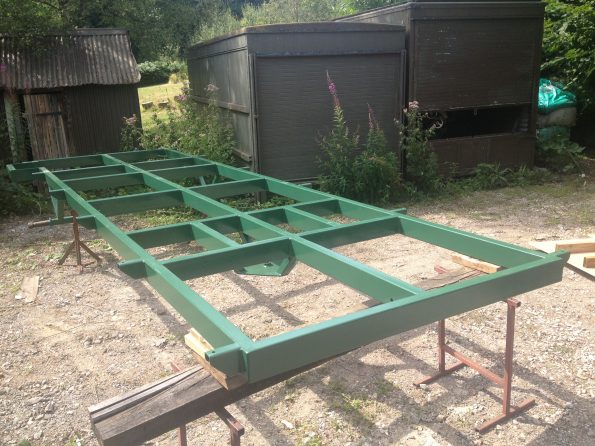 The chassis was given several coats of paint and levelled-up for the body to be constructed. 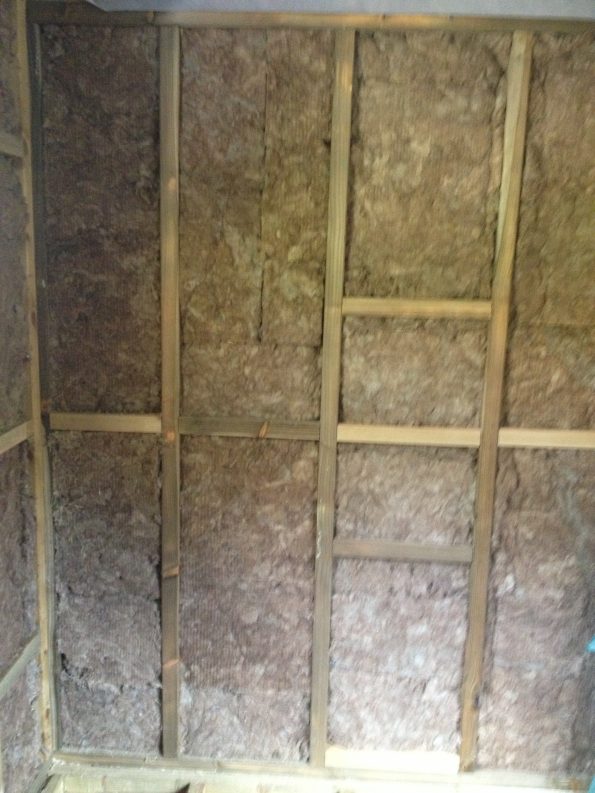 The wall construction was straight-forward, with an environmentally friendly insulation material fitted between the stud work.  This received a vapour barrier before the inner lining was fitted.  The exterior was clad with ship-lap.  At this stage the door frame hadn’t been finally fitted which is why it looks out-of-square in this photo!  😀 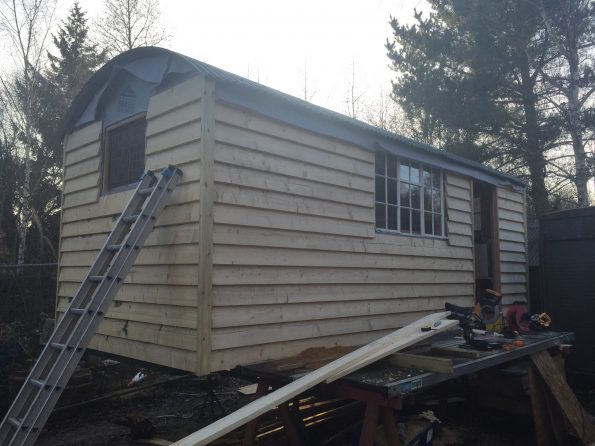 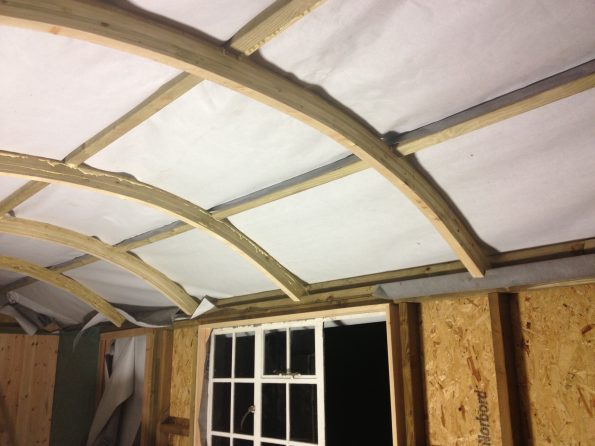 I built a steel jig, and laminated the curved roof beams which were massively strong.  Two of us could walk quite comfortably upon the roof covering with little, if any deflection.  Reclaimed crittal windows were fitted to the hut, and after restoration provided a suitably vintage look in keeping with our design aspirations. 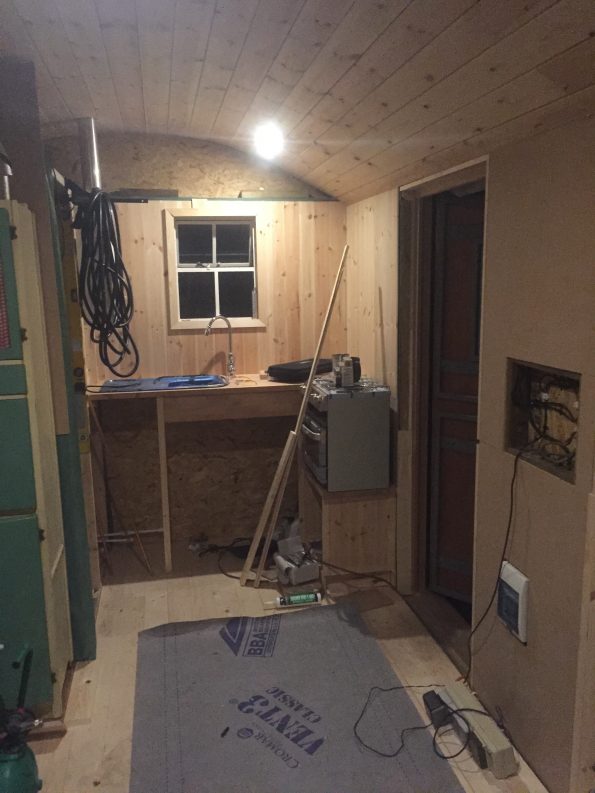 The kitchen end of the hut.  Behind the air hose hanging on the left is the water heater.  The white box set into the wall on the right is the consumer unit for the mains power,  the hatch above it being for the step-down transformer and control circuitry for the low-voltage lighting.  Still lots of trim work to do in this picture. 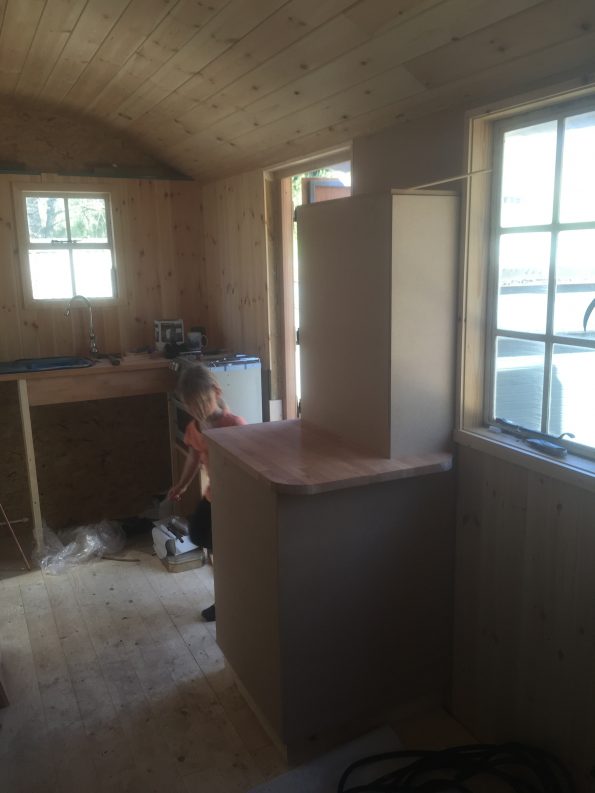 A small breakfast bar and storage cupboard was incorporated into the living space. 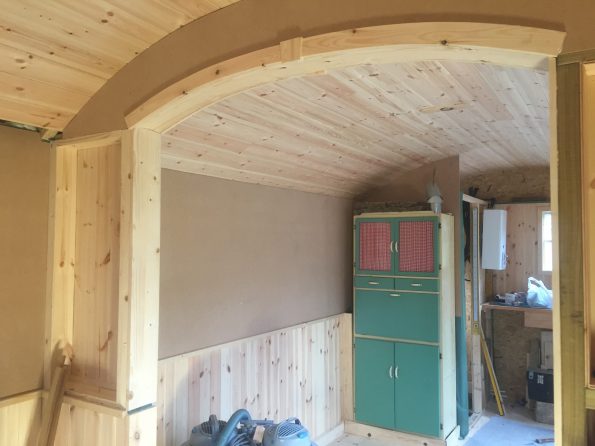 A reclaimed kitchen larder was purchased and built into the hut; another touch to give some vintage feel. 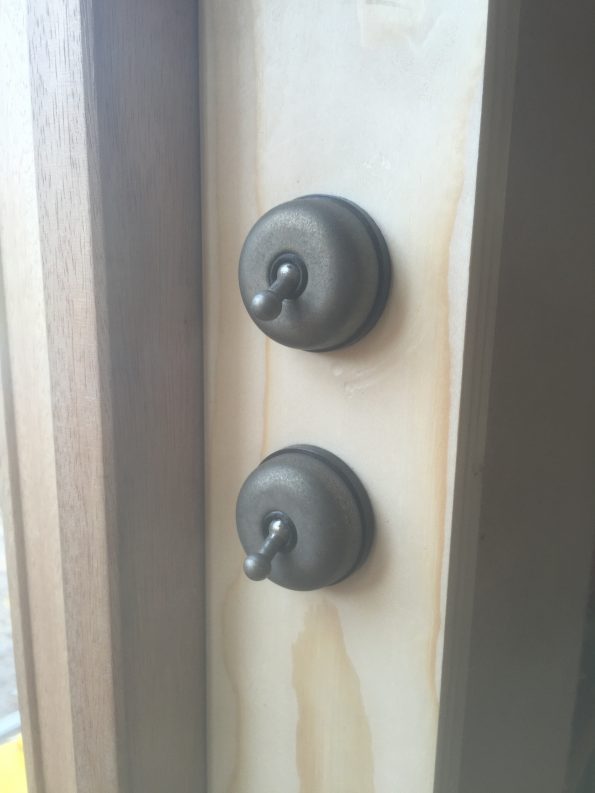 As were the low-voltage light switches.  These were refurbished internally, and fitted complete with their antique patina.  Again, a nod to traditional rather than contemporary. 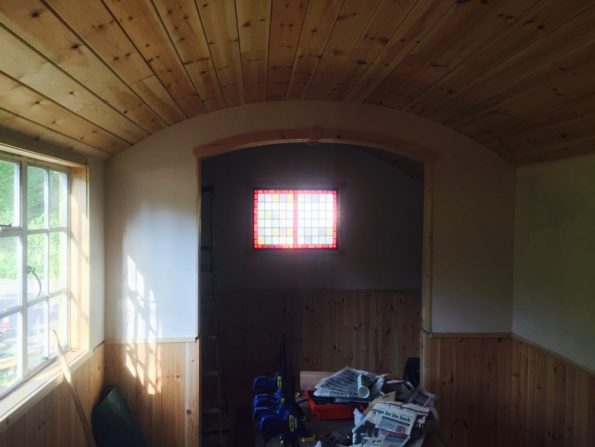 The client had requested a stained glass window for the bedroom end of the hut as it would be west-facing and would hopefully illuminate well at sun-set.  I had originally planned to make one to my own design inspired by the beautiful countryside the hut would eventually reside in.  However, a perfectly sized antique window was found by a friend, which complemented the theme of repurposing old fixtures and fittings.  The illuminating effect was tremendous, and despite my many attempts at trying to photograph it, this picture was the best I could take.  I hope you get the general idea. 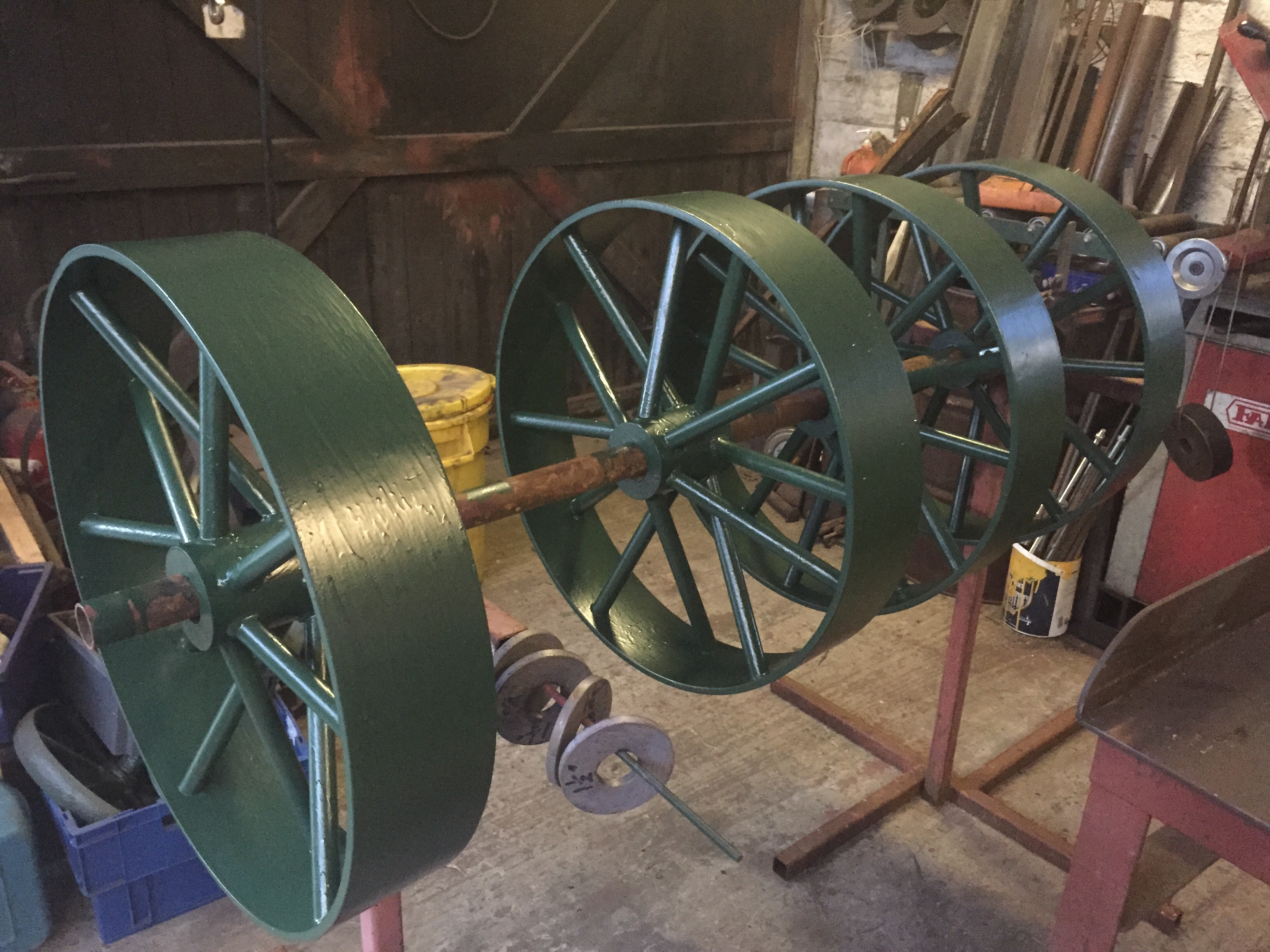 I was keen to differentiate the design of the wheels from other similar huts, so I opted for a built-up steel wheel, rather than the more typical cast iron wheels.  I will make a separate post about building the wheels, as they incorporated some interesting machining and fabrication techniques.  What isn’t clear in this photo is that the wheel centre and tyre are off-set, not by much, but enough to add just a little extra detail.  Care was being taken to ensure a bespoke build, and I wanted this element to be as individual as the rest of the hut. 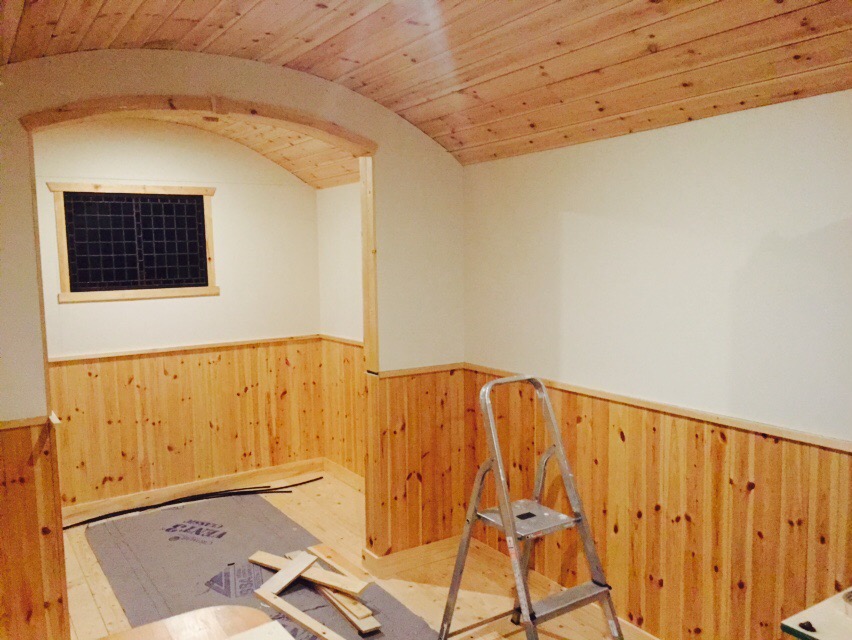 The interior was left mostly open-plan to accommodate the clients own furniture.  At this stage of the build there are still some trim items to add, but the general appearance can be appreciated.  Danish Oil was used on the woodwork. 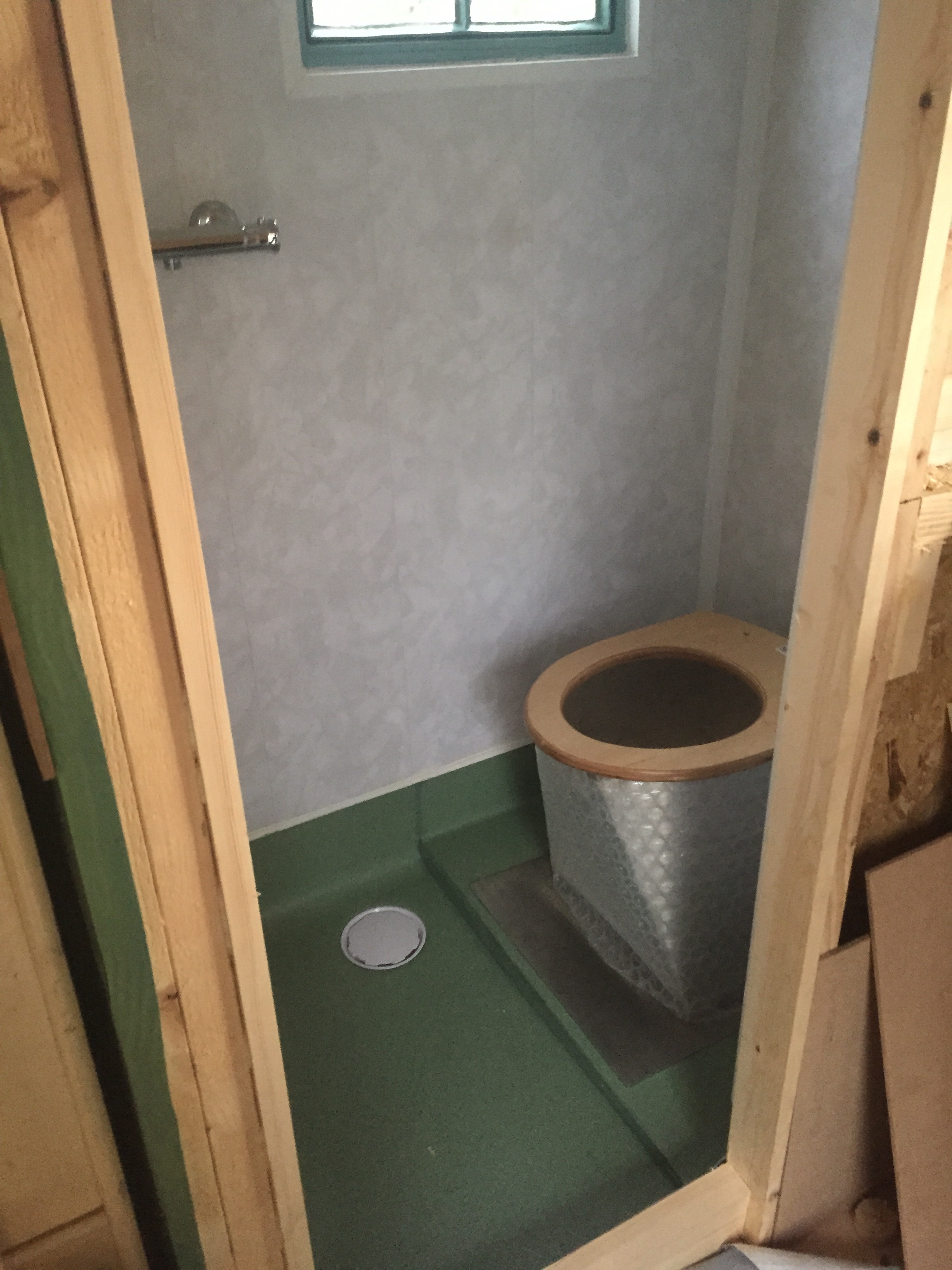 In addition to the kitchen area, the hut also incorporated a wet-room with shower and composting toilet, features which are very uncommon to find in a traditional shepherds hut.  Definitely very compact, but very useful. 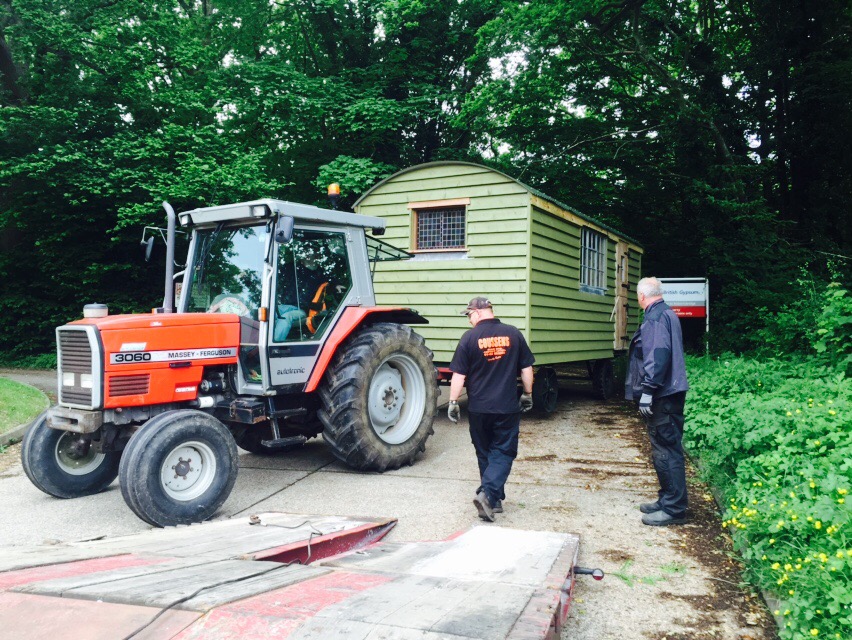 As it was necessary to transport the hut, the rear wheels were made removeable and a set of Land Rover wheels temporarily fitted onto specially made hubs, their pneumatic tyres being more compliant when towing than the steel wheels which would no-doubt have rattled and shaken the hut unnecessarily.   A custom drawbar, which was made detachable from the hut enabled it to be moved easily by a tractor, which could lift the front of the hut enabling it to be towed like a trailer. 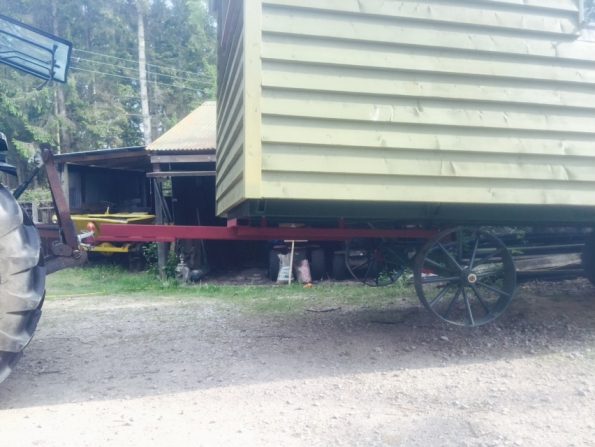 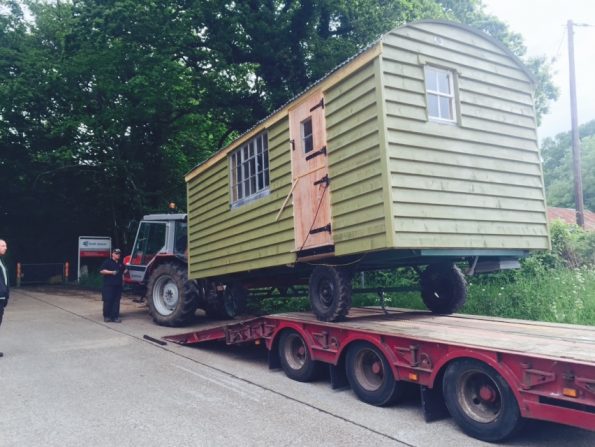 This photograph shows the hut being loaded.  By using a tractor and hydraulic lifting hitch the hut could be manouvered easily.  Note also the temporarily fitted Land Rover wheels.  The battens securing the stable door were a temporary arrangement to avoid the possibility of the doors opening during transit.  The black strip under the door was a steel fabrication with ‘ears’ to receive a custom-made set of steps. 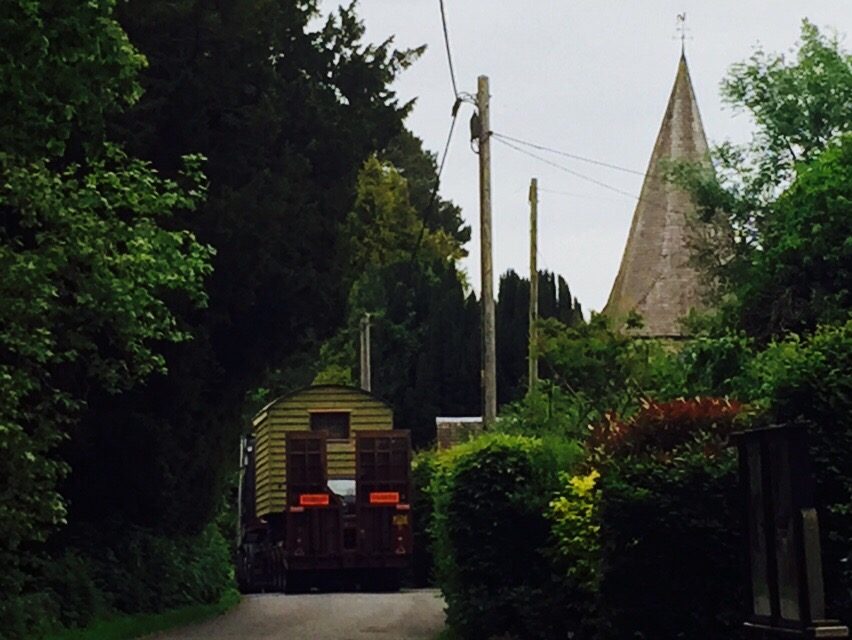 The hut is seen here disappearing into the distance for its new home in Devon.  Not to be seen again, (by me!), until I was emailed the photograph at the top of the page which prompted me to make this post!

If you are interested in building your own bespoke shepherds hut, and would like to know more of my experiences with this build, please do email or leave a comment below.  I’d be delighted to hear from you.