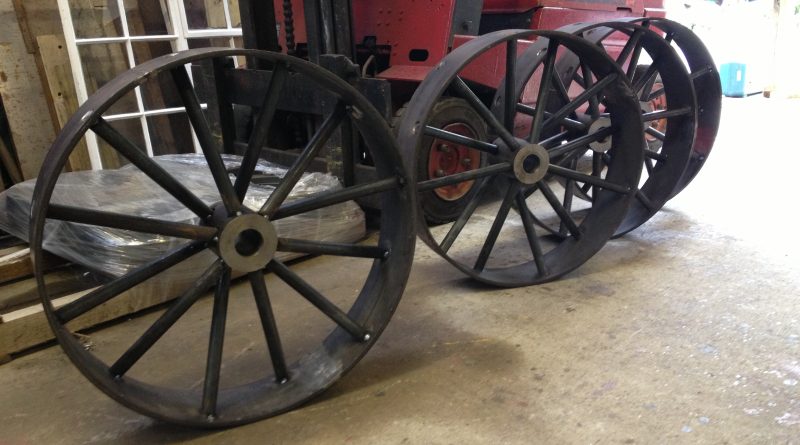 Whilst compiling my post about the shepherds hut, I was reminded of the complexity and care that we had taken to ensure the wheels were just how we wanted them.  As I had taken lots of photos during their build, I thought they would make an interesting post of their own.  But first some background…

If you are interested in shepherds huts, you’ll probably have noticed that most contemporary examples have cast iron wheels.  These are an important aesthetic feature, and commercial builders often incorporate thoughtful artistic detailing in their wheel designs.  For a non-commercial builder, ready-made examples can be purchased, which although representing a significant build cost do provide a simple solution, and avoids the need for time-consuming pattern making – itself a very skilled process.  In addition a foundry needs to be found capable of casting the wheels.  Foundries were once common, but not these days, and their costs are high.

For our hut we required a wider than standard tread width, which meant that an off-the-shelf product was out of the question.  In addition, I was concerned about the likelihood of the weight of our larger than standard hut causing stress fractures in the cast iron when towed.  However, I was still of the opinion that cast was the way to go, simply because every other hut seemed to have cast wheels.  Moreover, all the steel-wheeled huts I’d seen looked as though steel had been chosen as a low-cost solution and I wasn’t impressed.

I looked into the pattern making, which using Solidworks could have been taken care of quite simply using a CNC router.  However I simply couldn’t find a foundry which had the desire to take-on such a relatively small job.  My local foundry could do it, but were up-front and said it would simply be too expensive.

It seemed as though a fabricated steel wheel was to be the only option, I therefore determined to design the best wheels I could.

I looked at vintage agricultural equipment for reference, and this is what I came up with…. 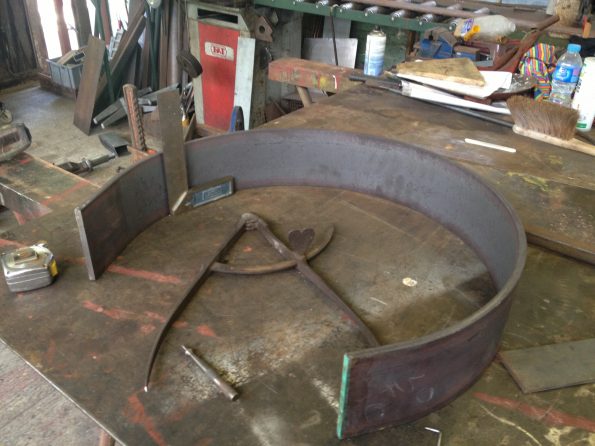 The process began by rolling some 100 x 10mm flat bar into rounds.  It wasn’t possible to roll a complete tread, so each would have to be formed in two halves, cut from pieces rolled over-size. 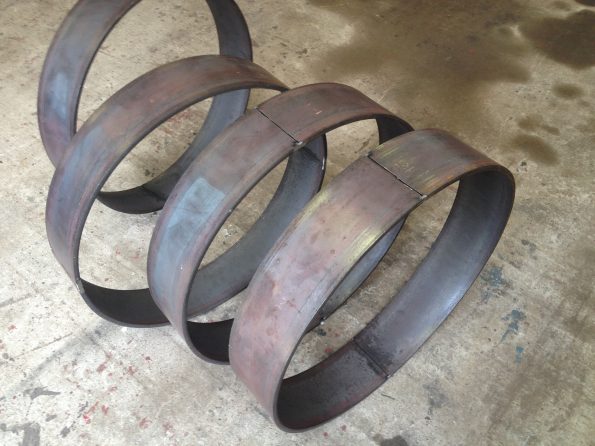 Having cut 8 half-rounds, these were tacked together to form 4 complete treads which were carefully measured to ensure each was perfectly circular and that their diameters were equal.  Sounds easy, but isn’t! 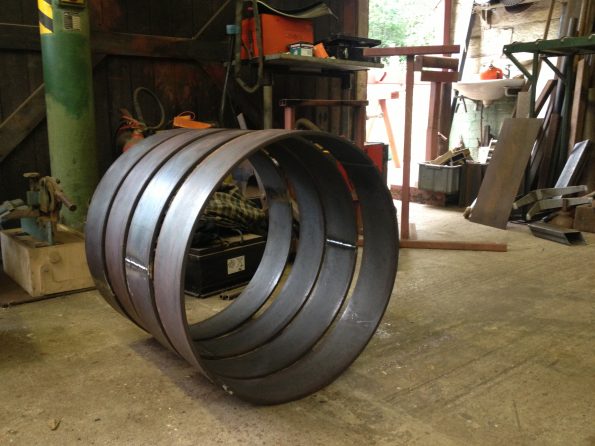 When satisfied, the rims were fully welded, and the welds ground down to ensure a smooth surface finish.  When finished and painted, the welded joints were invisible. 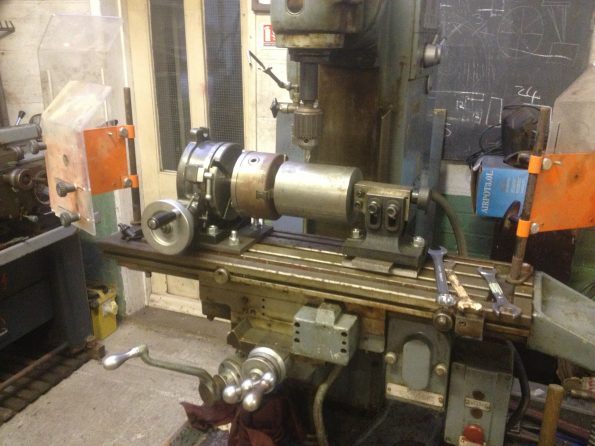 A 100mm diameter steel bar was cut and bored to form the wheel centre or hub.  This was mounted on the milling machine, held in a rotary table such that the spoke holes could be accurately indexed and centre-drilled.

Next, the holes were opened-up using a drill, and a countersink used to create depressions into which the spokes would fit. 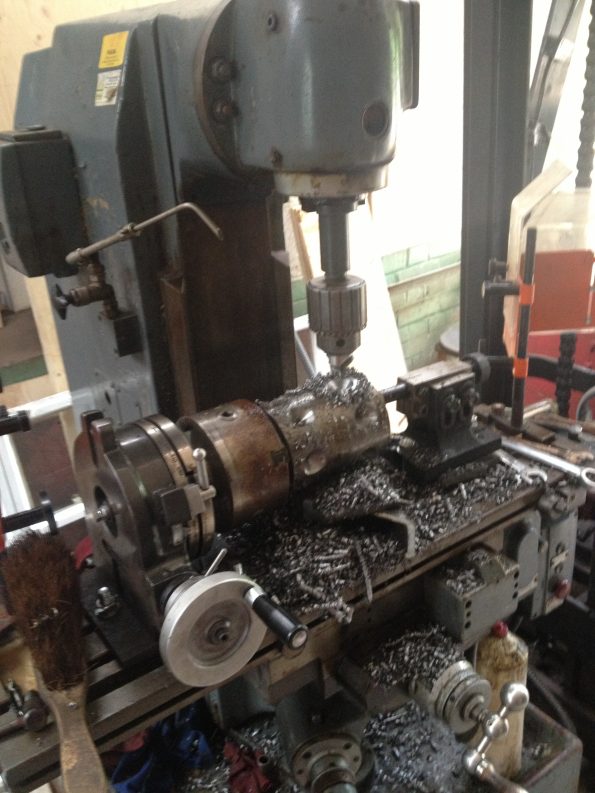 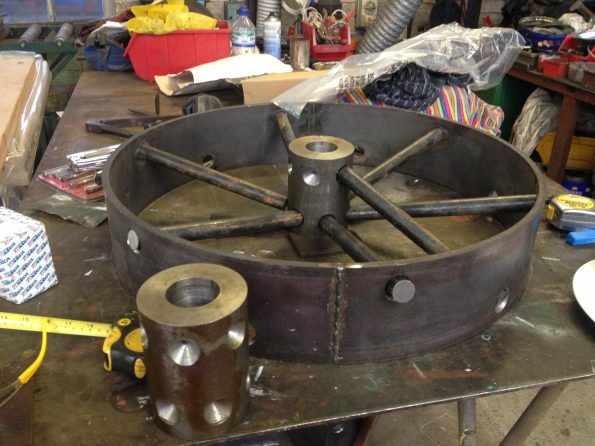 This photograph shows how the centre bosses have been drilled.  The rim has also been drilled by this stage and the 25mm diameter spokes fitted.  The arrangement of the spokes was derived from some of the vintage agricultural equipment I had studied, and is reminiscent of the spoked wheels fitted to traction engines.  The centre boss has been located on a jig welded to the bench, and held up from the bench surface to create an off-set from the rim.  A small detail, but one which added greatly to the overall aesthetic of the wheel.  The rim is also tacked to the bench at this stage once concentricity with the centre boss has been established.

The spoke holes in the rim were countersunk also to provide a chamfer for the weld bead which would hold the spokes at each end. 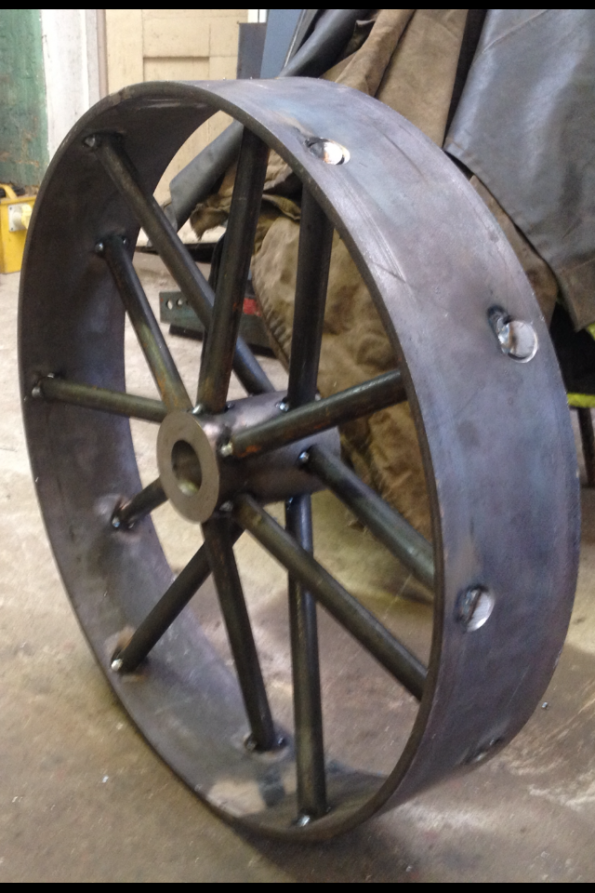 A tacked-up wheel showing the overall arrangement.  There were many hours work in both the design and fabrication getting the wheels to this point, and it was encouraging to see the outcome developing well.

A completed wheel.  It was amazing to see just how well balanced the wheels were.  When mounted on a spindle and given a good shove they span freely with very little shake or wobble. 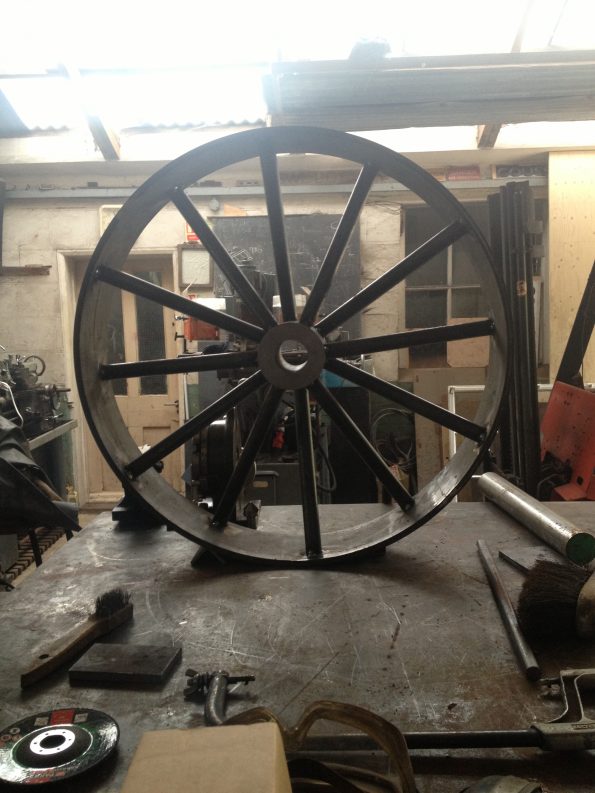